Barang was then formalised through the establishment of the Empowered Communities initiative in 2013, and was chosen by the NSW Government as one of seven regions for Local Decision-Making (LDM). Both these reform initiatives aim to drive significant reforms that deliver better outcomes for Aboriginal people using an Aboriginal-led, Government enabled approach. Barang Regional Alliance was established in 2016 to facilitate and drive our reforms.

2017
Extensive Community Consultation including youth surveys and workshops to Identify the priority issues. Empowered youth endorsed by the Barang Board as the priority regional reform agenda.

Healing forum – an initiative of the Barang, Yerin and Aboriginal Affairs in collaboration with the Healing Foundation Co-Facilitated by local emerging leaders to identify healing needs and develop strategies.

2018
Board commits to seek greater decision, with the sole purpose to lift the lives of our people and community. Pulled together to inform the content, design and delivery of the Emerging Leaders Development Agenda.

‘Statement of Claim’ formally lodged with the NSW and Australian Governments, to negotiate a tripartite agreement. Issues, outcomes sort and actions to get there detailed for: Leadership, Culture & Arts, Parent, Family Support & Early Intervention and Mental Health.

NSW Government declares Barang to be ‘Accord Ready’ and commences appointment of ‘Lead Negotiators’.

Agency Leads from all 3 levels of Government to join Barang Cultural Immersion.

The first Empower Youth Summit is held on Darkinjung Country bringing together over 150 Aboriginal young people.

2020
The second Empower Youth Summit builds on the success of the first Summit connecting Aboriginal young people to culture, each other and their community.

The Regional Aboriginal Data Network is launched as Ngiyang Wayama (meaning ‘we all tell’ in Darkinyung language) with an agreed Terms of Reference.

The Central Coast of NSW lies on the traditional lands of the Darkinyung people and is a centre of historical significance for many tribal groups across NSW.

This is sandstone country, where the flat rocks and caves have preserved over 2,985 traditional carvings, paintings and stories and where the Darkinyung and Awaba people shared a close relationship, regularly gathering for traditional ceremonies.

The Central Coast Darkinjung Country was also a traditional meeting place for Aboriginal tribal groups including the Gomeroi, Wiradjuri, Gadigal, Worimi, Darkinyung, Awaba and Wonnarua people who gathered at Mt Yengo for ceremony and negotiations. Today, many of the first nations people from across Australia now call the Central Coast home.

The Central Coast Darkinjung Country is located on the coast of New South Wales 60 – 90kms north of Sydney CBD and 80kms south of Newcastle CBD. This in some cases puts the Central Coast and our Community at a disadvantage when resources are being distributed within regional boundaries.

The Central Coast of New South Wales is home to one of Australia’s fastest-growing populations of Aboriginal people in Australia.

One of the defining features of the Aboriginal population is the low median age, with 56% of the population under the age of 24.

There is significant drop of 23% in the population amongst the 20-24 years old, indicative of a mobile population leaving the region to seek employment upon leaving school.

‍“The Darkinyung language, my language and the language of my people was thought to have been lost many years ago, along with our songs, stories and dance. This left a void in our lives and we felt incomplete, not having or knowing the language of our ancestors”. 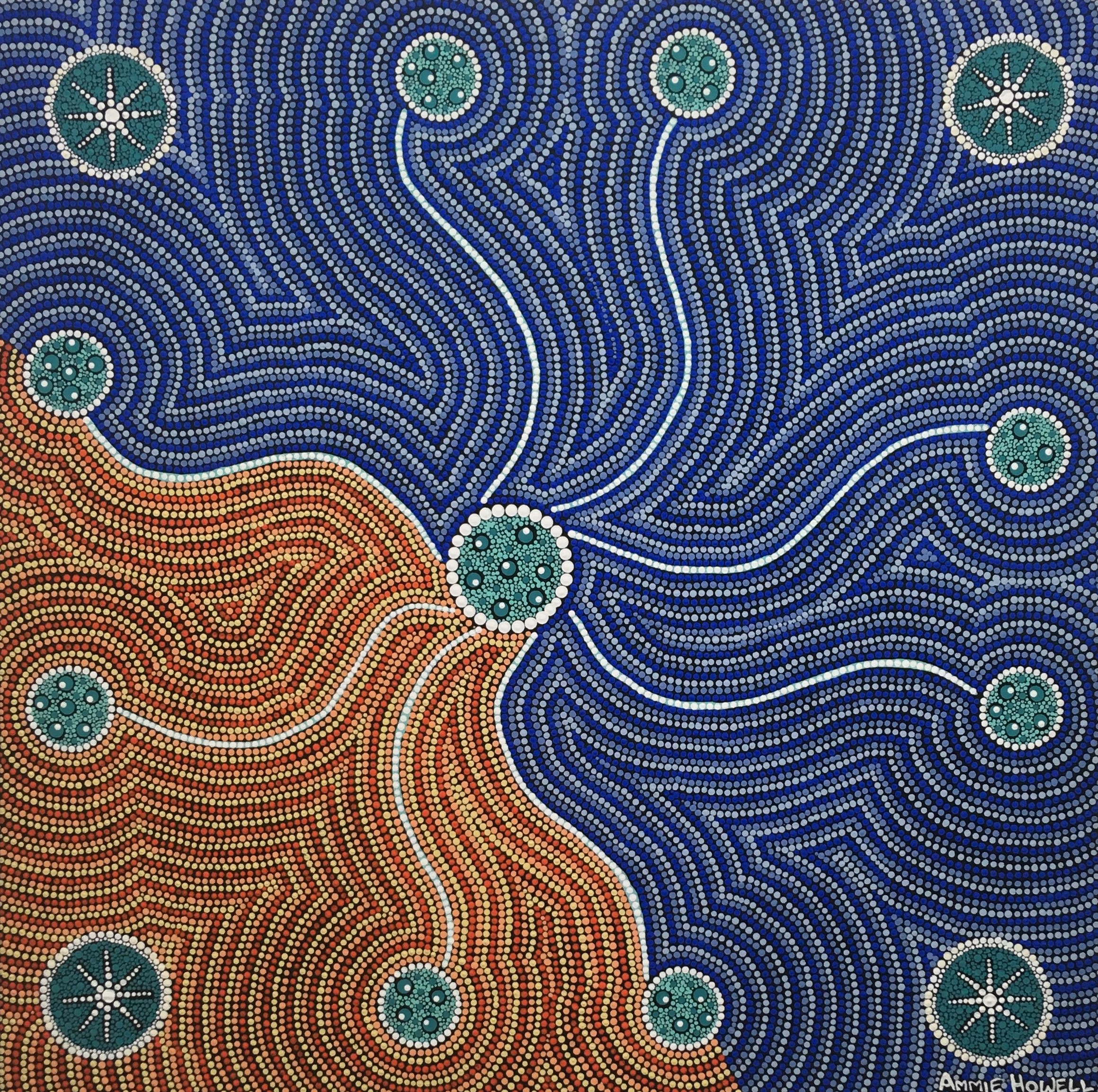 This artwork represents Community groups coming together on Darkinjung Country working and uniting towards our future.

The four stars in each corner represent North, South, East and West. The background colours representCountry, land, sky and sea.

About the artist:
‍Ammie Howell is a Penangke Skin woman from the Arrernte people, Alice Springs, Northern Territory. Her dreaming comes from the Ntyarlke (Caterpillar).

She began painting in her early 20’s alongside her mother and mother in-law. Her works have been sold nationally and internationally.

Ammie is an Aboriginal Artist who uses patterns, colour, shape and design to create paintings that portrays sense of country, culture and self.